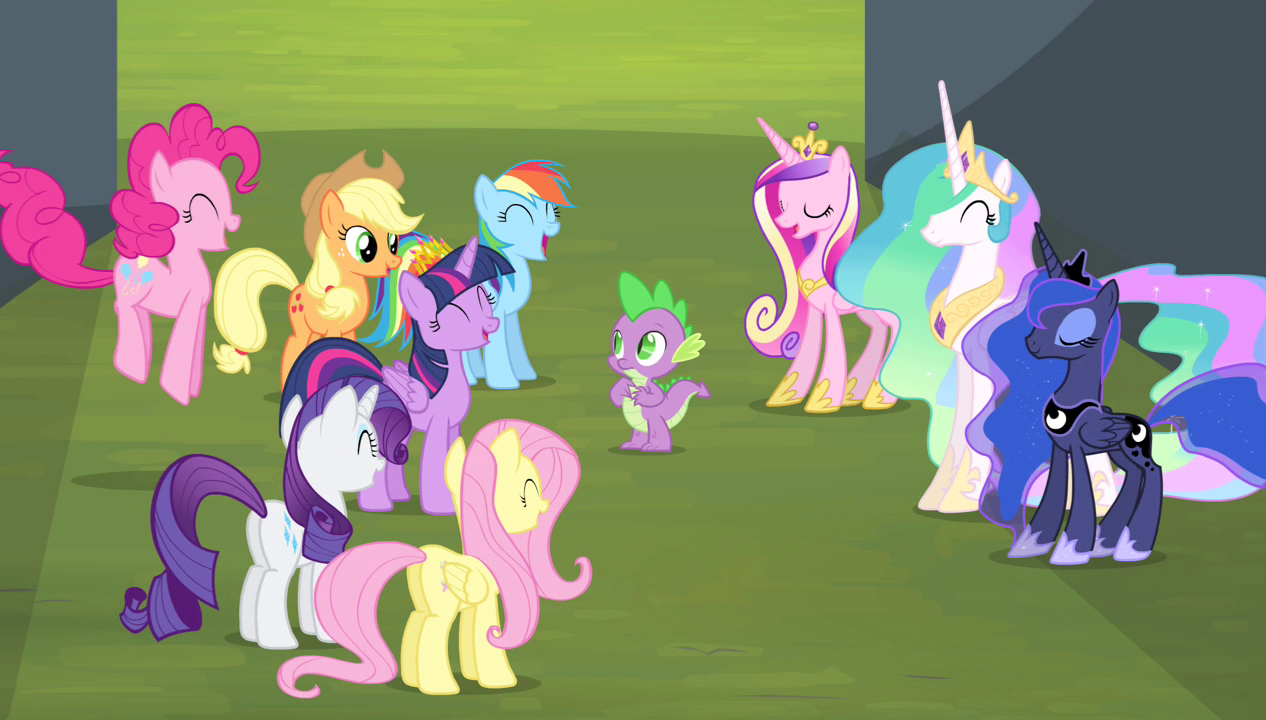 Spike with the Mane 6 and 3 of the Princesses of Equestria.

We do not know much about Spike's early life. All that we do know is that he was hatched by Twilight Sparkle during her entrance exam into 'Princess Celestia's School for Gifted Unicorns'. He eventually grew up to become Twilight's assistant during their stay in Canterlot, and continued to work as her assistant when they were moved to Ponyville. He became quick friends with each of the 'Main 6.'

When Spike arrived in Ponyville, he lived with Twilight Sparkle in the 'Golden Oak's Library' before living in the 'Castle of Friendship' after Tirek destroyed it during his rampage across Equestria. He continues to reside in the Castle to this day, living with Princess Twilight Sparkle and Starlight Glimmer.

Although he is quite young, Spike has accomplished quite a few feats over the years of being friends with the Elements of Harmony. First and foremost: he played a critical role in stopping King Sombra from retaking control over the Crystal Empire. His heroics have earned him the title of 'Spike the Brave & Glorious' among the crystal ponies. Later on, during the first official Friendship Games held in the Crystal Empire, he saved the entirety of the stadium from being crushed by an iceberg after an arrow misfired and hit a cloud floating above the stadium.

Later on, he participated in the Gauntlet of Fire, a competition held by the current ruler of the Dragon Lands to choose a new Dragon Lord. He was opting to leave the Dragon Lands until he overheard a group of dragons boasting about what they would do to Equestria. In a true act of selflessness, he risked injury for Equestria and his friends. He ended up winning the competition and subsequently held the title of Dragon Lord for a few moments before passing over the Bloodstone Scepter to Princess Ember. The friendship he showed Ember during the competition helped secure the Dragon Lands as a friend to Equestria, as well as begin a new era for all dragons. An era of friendship.

Lastly, Spike has helped bring about the reformation of the Changelings. He stood up for Thorax while most of his friends all wanted him banished from Equestria, he could have been banished as well, he knew this and still took that risk. He was able to prove to them that Changelings can change, which led to the crystal ponies openly accepting Thorax as their friend, no matter how he looked. If he hadn't done this, the second Changeling invasion would have ended much, much differently.